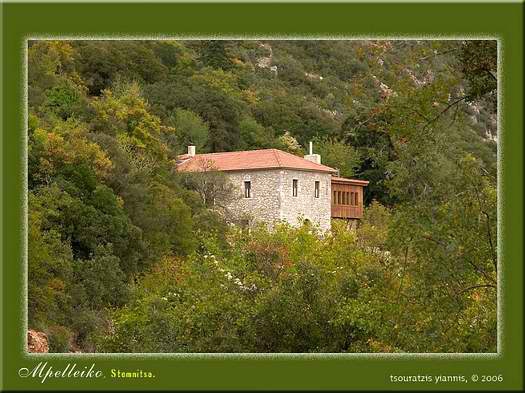 A traditional old stone guesthouse with a breathtaking view. Its name derives from its owner, Mpellas. No one suspects that the miraculous secret hostel is right above the main road of Stemnitsa, only 300 meters away.
Read more...
[Reviews : 4]  [ Web Site ]
Errors?

Three different roads lead to the square of Stemnitsa, which is 1100 meters above sea level. The first heads from Tripoli to Levidi, Vytina, Dimitsana, and Stemnitsa. The second road turns from Vytina toward Pyrgaki, Elati, and Stemnitsa, passing through the mythical fir forest of Mainalon, a true natural monument; this takes half an hour by car. The third road runs from Tripoli to Chrysovitsi and Stemnitsa, half of it through forests, with 71 tree-covered hilltops.

For many centuries, the Mainalon forest has embellished Stemnitsa, grand old queen of mountainous Arcadia, mythical home of the god Pan, and monument to a celebration of life.

The three towns of mountainous Arcadia--Stemnitsa, Karytaina, and Dimitsana—are ornaments of the Peloponnese, reflecting the area’s architecture, city planning, geography, and history with their post–Byzantine folk culture.

Important monuments are scattered throughout the Stemnitsa area: the sacred remnants of ancient Gortys, 400 BC; the Monastery of the Philosopher, 930 AD; and the Monastery of Saint John the Baptist, built in a prominent place, listens to the musical echoes of the mythical Lousios River. This is the Meteora of the Peloponnese. To the north is the elegant, hospitable Monastery of Aimyalos. And these are all covered by the star–embroidered veil of life of the immense forest.

One surprise follows another. The 9 kilometer route from Stemnitsa to Dimitsana is unrivaled. Its landscape is like Delphi’s, but even better. Halfway through it, one encounters the dependency of Saint Dimitris, where cold water flows from the stone fountains all year round.

Stemnitsa got its name from a Slavic toponym that means a closed, forested place. Stemnitsa’s official name is Ypsous, the name of the daughter of Ypsounta, one of the 50 children of Arkas, land of all the ancient gods and mythical heroes of the world. The original motherland of Hermes, Zalefkos, and Athena was Arcadia, and according to mythology these spiritual personalities underwent numerous transfigurations. Offspring of an ancient people, the Hellenes, they were gifted with a keen versatility of feelings.

As I was passing, I happened to notice a small hand-written sign for “the Mpelleiko,” a traditional old stone house with an endless view. Its name, pronounced “bell-EH-ee-ko,” derives from its owner, Mpellas (pronounced “bellas”).

No one suspects that this miraculous hidden guesthouse is right above the central road of Stemnitsa, only 300 meters away. It is a fascinating place of divine beauty, a real dreamland created by man’s intelligent poetic instinct.

Around and in front of it, the endless horizons flow with musical harmony. Across from it: the Lykaion Mountain. In the distance to the left: the poetic Mount Taygetos. To the right: the Ionian Sea, with Zakynthos in the background.

All the images mirror poetic prayers of wisdom and are bathed in secret whispers of the soul. A step farther up, you travel with the clouds, holding the moon in your arms on a night full of stars. An endless dream!

At the Mpelleiko guesthouse, every room has a fireplace for winter time. Grandmother’s neat hand-made sheets and the colorful woven blankets inspire a genuine, archetypal aesthetic admiration. All the windows face open horizons of unrivalled landscape, where the fir trees stand proud in their epic loneliness. For breakfast, there are home-made products with flavors that emanate from the depths of tradition. The cost of the room is reasonable, showing respect for the visitor.

With the genuine, hearty hospitality of the enterprising owner, Mrs. Nena Gkrintzia, who has a university degree in geology, the Mpelleiko is the crown of Stemnitsa.

The epic-lyric expedition from the pathways of Mainalon to Mpelleiko constitutes a conquest of the guileless gaze and a realization of the soul’s fervent dream.

In the Guest Rooms:

Hotel Trikolonion Country (ARKADIA, GORTINIA)
There were four impressive 19th century stone buildings. The main one had served at times as a girls’ boarding school, a…

Traditional Guesthouse Kolokotronis Mansion (ARKADIA, GORTINIA)
At the entrance to magnificent Stemnitsa, literally hanging over the gorge that leads to the Lousios River, the Kolokotr…
More

Τhere are 4 Comments in total.