Guide Best of Halki: Our Top Ten (DODEKANISSA, CHALKI)
Halki is a place that you feel you will definitely return to some day. In a day or two, you have become friends with eve… 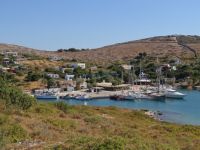 How to Get There - Transfers
(Guide)
DODEKANISSA, CHALKI, Municipal Division

The island has no airport, but dozens of international airlines fly to Diagoras International Airport in Rhodes (IATA code: RHO). From Rhodes you can reach Halki by sea from the port of Rhodes or from Kamiros Skala (mainly during the summer months). From the main port of Rhodes, you can take a ferry boat from a major company (about 2 hours), or use one of the local ferry routes (such as Dodekanisos Seaways, about 75 minutes). From the second harbor of Rhodes in Kamiros Skala, you can take local boats or speedboats for tourists, as well as water taxis, which make the journey in less than an hour. Another alternative is a ferry boat from a major company in Piraeus that follows the arid off-the beaten track route of the Aegean islands. That trip takes about 22 hours, and boats are not available every day.

You can get to Halki

The island has no airport, but dozens of international airlines fly to Diagoras International Airport in Rhodes (IATA code: RHO) with regular flights or charter flights. At the airport, you will find taxis to take you to one of the two ports from which you can get boats to Halki.

From Rhodes, you can reach Halki by sea from the port of Rhodes or (mainly during the summer months) from Kamiros Skala.

The departure times for local transport sometimes change without notice, so it is a good idea to confirm schedules before your departure whenever possible.

Rooms to let Indigo Apartments and Rooms (KIKLADES, Serifos)
Just 40 meters from the sea, in the center of Livadi, Indigo Studios and Rooms offers a quiet and comfortable place to s…
More