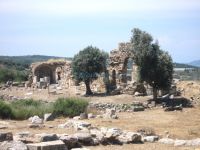 Guide Get to know Trizinia (ATTIKI, TRISINA)
The region is touristically very interesting, as it offers as much in the way of exploring as for quiet holidays away fr… 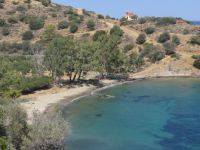 Guide South east Troizinia (ATTIKI, TRISINA)
From Saronida and beyond, we start our exploration of the last part of Troizinia that covers its eastern area up to our …
More 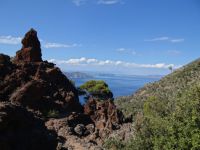 If you enjoy searching, a return to values and customs that have been lost, simplicity, the grandeur of Nature, alternative tourism, then Methana will be a point of reference for you to which you will return again and again.

Starting from Taktikoupoli in Trizinia and heading north through the narrow isthmus that leads us to the Methana peninsula, we get the impression that we are going back in time, to the distant past. To most of us, Methana was known as a spa resort without any other particular interest for tourists, and the truth is that if we expect to find all the standard tourist amenities of a typical Aegean island, we will be disappointed. But if you enjoy simplicity, a quest, a return to values and habits lost, the grandeur of nature, and alternative tourism, then Methana will appeal to you so much that you will want to visit again and again to explore every bit of it. 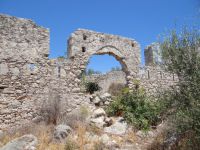 Entering the peninsula, as soon as we pass the cove of the Strait with the fish farms on our right, the time machine turns back to 1826, when the French philhellene General Charles Nicolas Fabvier built his castle at the top of the hill on our left and organized the first tactical Greek army corps (hence the name of the village opposite the castle, Taktikoupoli, from the Greek word for "tactical"). The castle was built on the ruins of 5th century BC fortifications of the Athenian general Nicias (from the period of the Peloponnesian War). 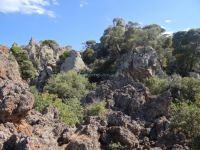 What stands out immediately in Methana is the topography of the land, where the volcanic activity of the peninsula is literally imprinted. The volcano of Methana is one of the forty active volcanoes in Greece, and one of the last to erupt (around the middle of the third century BC, according to Pausanias and Ovid). The crater from the last eruption is located northeast of the peninsula in the Kaimeni (or Kammeni) Chora (or Burnt Country). A 40-minute uphill path carved between petrified lava rocks will lead us to this. At the end of it, we will also encounter one of the most impressive geological formations in Greece. 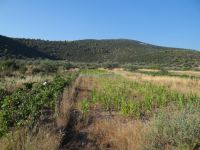 On the peninsula, thirty craters have been recorded, with the last record (in 1987) concerning an underwater crater at a depth of 200 meters. The largest terrestrial crater is located in Throni, west of Methana. It took its name from an ancient throne discovered in archaeological excavations there in 1912. 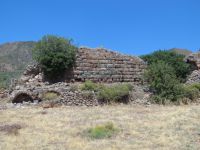 The peninsula shows signs of continuous habitation beginning in the Neolithic period. Such signs have been discovered in Palaiokastro, in Vathy, and at the top of Chelonas (which we can reach in 3 to 4 hours via a smooth hiking trail that begins at Megalochori). In Palaiokastro, substantial portions of the walls of the acropolis of the ancient city of Methana have survived. Part of the ancient city is now below sea level due to landslides, in the area in front of the seaside village of Vathy and the peninsula of Pounta. On the way from Methana to Stravolongo, inside an olive grove on our right, we will find an ancient tower, a well preserved structure from the 4th century BC with carved volcanic stone and an impressive gateway. 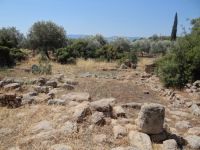 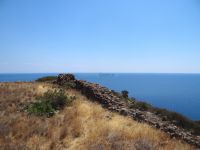 Signs of habitation and evidence of civilizations from different chronological periods are evident all over the peninsula. In 1990, archaeologist Eleni Konsolaki made a very important discovery of a prehistoric Mycenaean settlement (from the 13th-14th centuries BC) on the hill with the chapel of Saints Konstantinos and Eleni (Constantine and Helen), 1.5 km from Methana on the road toward Kypseli. Ruins of a Mycenaean acropolis survive on the hill of OGA (which took its name from the tower of Aga, which was in this area), east of Kypseli. The hill offers beautiful views east to Poros and the petrokaravo (stone ship). During Byzantine and medieval times, the main settlements developed in the currently deserted Panagitsa, on the peaks of Chelonas and Profitis Ilias (where the ruins of residences survive), and in the area of Agia Varvara west of Kounoupitsa, where we also find two of the oldest surviving post-Byzantine churches of Methana, Agios Dimitrios and Agios Ioannis o Theologos (Saint John the Theologian), with beautiful masonry and frescoes. 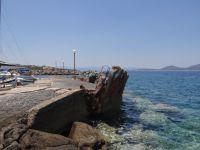 Historic memories also capture later, more bitter periods such as the time of the Second World War and the German occupation, with the impressive concrete German ship that has been converted into a pier in the picturesque harbor of Agios Georgios in the northern part of the peninsula. 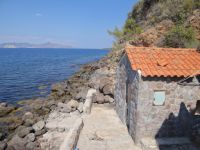 As mentioned earlier, Methana has been known to most people as a spa town with mineral springs. These springs were created as a result of volcanic action on the peninsula. The springs were mentioned by Pausanias, and indeed the old baths next to the sea in Agios Nikolaos (on the northern part of the peninsula) are called the Pausanias Baths. They are in poor condition, operating today but requiring medical monitoring and great care during their use (due to fumes). 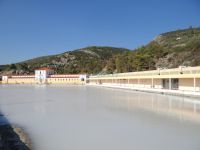 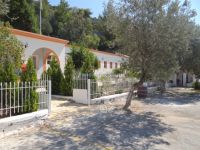 Basic theurapeutic spa facilities currently operate in the city of Methana, in renovated facilities by the Vromolimni (with the impressive "white" waters and the characteristic sulfur odor, opposite the "little island" of Agion Anargyron), where there is an old therapeutic spa of EOT. There are also facilities in the area of Agios Nikolaos, with the richest springs in the world in silicic acid, on the coastal road of Methana that leads to the beach of Limniona. 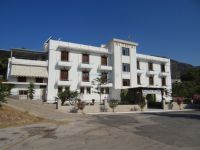 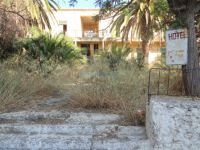 The first spas in the city were built in 1906, and those in Agios Nikolaos, in 1912. Since then, Methana has enjoyed great prosperity due to tourism focusing on the spas. Hotel units were built, examples of which we see today, some in use (such as "Ai Pigai"), and others now abandoned ruins, such as the interwar hotels "Aithra" and its neighbor, in the back street which runs parallel to the coastal road of the city of Methana. 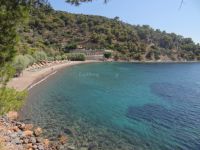 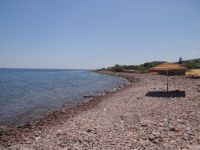 Signs of volcanoes are apparent everywhere, even on the beaches of the peninsula. The only exception is Limniona, at the north end of the coastal road that starts from the town of Methana, which has the characteristics of a typical large, sandy, organized beach. All the other beaches in Methana are rocky, with large, dark, red-black pebbles and dark colored, crystal clear waters. Most of the beaches are solitary and secluded, ideal for those seeking peace and quiet. For young children, a perfect little beach is the shallow, sandy and well protected beach in the picturesque harbor of Agios Georgios, across from the concrete German ship. 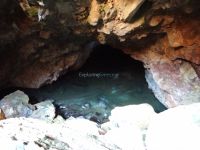 In addition to the volcano, an impressive geological phenomenon is the 2.5 million year old Spilaio tis Peristeras (Cave of Peristeras), which was discovered in 1973 during drilling for the coastal road that runs from the entrance of the narrow isthmus to Vathy. Access is free and at your own risk. The first chamber of the cave, which is accessible with care from the cave entrance, is essentially an underground lake that must be crossed by swimming or with a small inflatable in order to go deeper into the cave. Not recommended for those who do not have the proper equipment and knowledge. 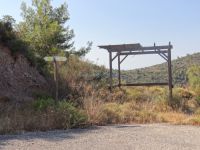 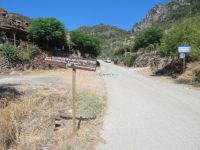 What will most satisfy visitors who enjoy alternative tourism are the hiking trails among the endless paths of Methana. There is a network of 70 kilometers of marked trails, many of them made of stone, which cover the entire peninsula, enabling hikers to explore the rich geological, archaeological and local history of the area (including protected archaeological sites). Examples include the hiking trails from Megalochori to the top of Chelonas (3-4 hours), the path from Makrylongos to the top of Profitis Ilias (90 minutes), the path from Kammeni Chora (Burnt Village) to the Krasopanagia Cape (2 - 2 ½ hours), and the 4.7 km path from Kypseli to the Mycenaean acropolis on the OGA hill. 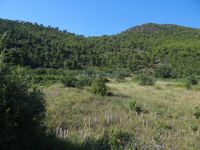 The main paths of the peninsula cross the center of the valley of Stavrolongos (hence its name, from the Greek word for cross, although they now call it Stravolongo). This valley is one of the oldest volcano craters on the peninsula. 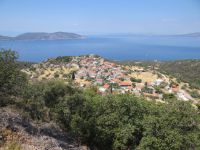 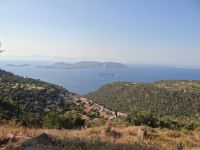 All the villages of Methana exude the nostalgic feel of a bygone era. Remote and scenic, with few inhabitants, they preserve memories that have been permanently lost elsewhere. Starting from the western part of the isthmus, we find the fishing village Vathy, with its very picturesque enclosed port. Next, we climb to the impressive Kaimeni (or Kammeni) Chora (or Burnt Country), which was burnt by the volcano. Then we continue east to Makrylongos, currently the most mountainous residential settlement of Methana. From there we can either head north to the Old Baths and continue to the coast toward Agios Nikolaos, with the Pausanias Baths, or head east to the large traditional settlement of Kounoupitsa to return to the north coast and Agios Georgios, with its concrete German ship. 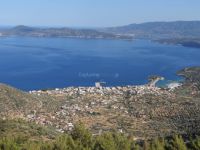 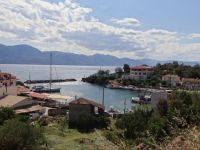 From Agios Georgios, the road continues along the coast toward Agii Theodori, with windmills and a beautiful view toward the Saronic Gulf. From there we either follow the road toward the mainland and Kypseli, or we continue on the coastal road toward the spa town of Methana. Both roads eventually lead us to the beautiful spa town with its neoclassical buildings, the thermal springs, Vromolimni, the port, and the little island of Agii Anargyri, with its church and the remnants of cyclopean walls. Finally, from the spa town, the road ascends to the NE toward the deserted settlement of Panagitsa and then Megalochori, above the acropolis of ancient Methana and the "small" settlement Megalo Potami (Grand River) above Vathy. 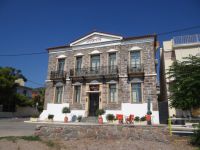 In Methana, we will not find major hotels or an abundance of rooms to rent (as in Poros). Next to any tourist accommodation that has remained from the days of the thermal springs (several of which have been renovated), some small, elegant traditional guesthouses have been created. For food, we can find several simple traditional taverns or fish taverns that will satisfy us completely. Methana can be reached both by land and by sea. By land, the distance from Athens is approximately 180 km; follow the road from the Isthmus toward Epidaurus and then toward Kranidi, turning left (toward the sea) for Trizinia, passing Kalloni, Metamorphosi, and Taktikoupoli, and finally crossing the isthmus to Methana. The entire journey takes about two hours.

By boat, there is a regular ferry connection through the port of Peiraias (Pireas) on a boat that stops at Aegina and Agkistri as well as Methana. 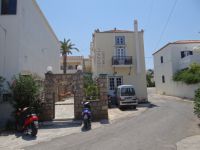