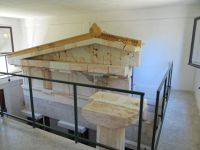 The Museum of the Archeaological Site of Afea. On display are mainly exhibits and reconstructions of the old temple that was built in 575BC, it was burned and in its place the temple seen today was built (500BC).

It is situated on the top of a hill covered with pines, in the NE part of the island, and is distinguished by the very good preservation of the Late Archaic temple. The sanctuary was initially dedicated to the cult of Aphaia, a local deity later assimilated by Athena. Finds dating from the prehistoric period - including figurines of breeding women - point to the conclusion that the cult was established very early, possibly in the beginning of the 2nd millenium B.C. Judging from votive offerings and, mostly, from building activity, the sanctuary flourished mainly in the Archaic period. At the end of the period, around 500 B.C. and a little later, the sanctuary assumed the monumental form it preserves today. The area was evened off by the construction of isodomic walls which retained the earth on which the temple was erected, along with the altar, the propylon and various lesser buildings. A second period of prosperity came in the mid-4th century, leaving its traces on the remodelling of the altar and the construction of new buildings to the SE of the temenos. Pottery evidence of the following periods suggests restricted activity on the site until the beginning of the 1st century B.C., when the sanctuary definitely declined.