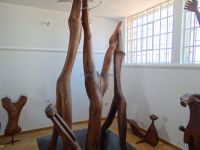 Christos Kapralos was one of the most important Greek sculptors of the 20th century modernist movement. Works of his, such as the Crucifixion of Christ, the Memorial of the Battle of Pindos, and his paintings are displayed in the six rooms of his museum.

The Christos Kapralos Museum is located near the northwestern tip of Aegina, on the coastal road. It consists of six rooms which were once the sculptor’s workshops, and the estate that surrounds these rooms was landscaped by Kapralos himself.

In the museum, visitors can observe works by the great artist that span the period from 1963 to 1993, when he passed away. The first Kapralos work that we can admire even before we enter the museum is the statue of the "Mana," symbol of the Greek mother, the woman of labor who struggles hard for her family and children. This copper sculpture is located in a landscaped square by the sea, across from the museum.

The materials that Christos Kapralos worked with are wood (large eucalyptus logs), Aeginian ‘pouri’ (sandstone), gypsum, copper, stone, and—as in some of the works exhibited in the museum courtyard--marble from Paros. He also created paintings, terracotta works, and ceramics.

Sources Municipality of Aegina and AeginaGreece