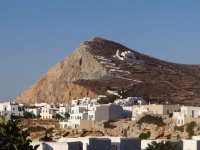 Guide The 10 Best Experiences in Folegandros (KIKLADES, FOLEGANDROS)
Magical Chora, the untamed beauty of Ano Meria, secluded beaches, small tavernas: Folegandros has so much to offer that … 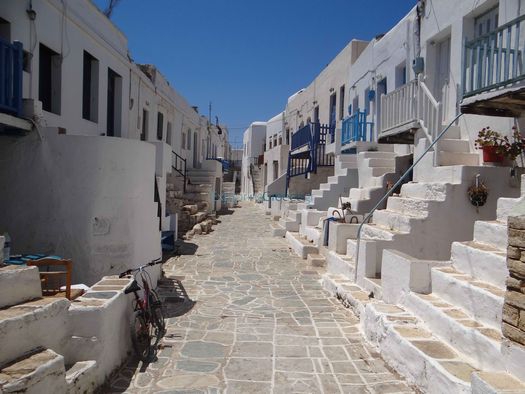 Casual but cosmopolitan, quiet but well known, barren but rich, sophisticated and also modern, the island of Folegandros wins over more and more faithful friends and is becoming one of the hottest destinations in the Aegean.
Read more...
[Reviews]
Errors? 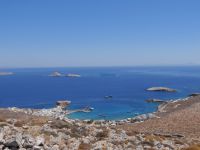 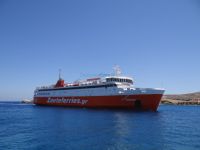 Casual but cosmopolitan, quiet but well known, barren but rich, sophisticated and also modern, the island of Folegandros wins over more and more faithful friends and is becoming one of the hottest destinations in the Aegean. 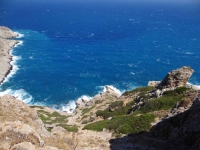 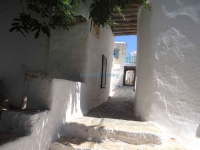 In the late 1980s and early '90s, the first hotels in Folegandros began to be built. Until then Folegandros, a small, arid island in the southern Cyclades, was a well-kept secret. There were only a few rooms for rent, and usually the locals rented them for some extra summer income, not as their main occupation. Electricity had not yet reached the area. 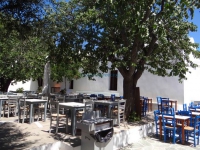 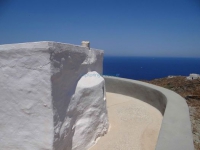 Gradually, hotels began to be built in Chora, and more and more visitors came and learned about that secret destination. The impact of travel agents who had already sent thousands of foreign tourists to the neighboring island of Ios fell on deaf ears. The first entrepreneurs of the island, recognizing the significance of the amazing scenery, the atmosphere of Chora, the purity of Ano Meria, and the seclusion of the beaches, refused to have their island overwhelmed by mass tourism. They preferred the gentle development that respects the residential and architectural landscape, with selected guests and the slow but steady rise of Folegandros on the tourist map of Greece and the world. 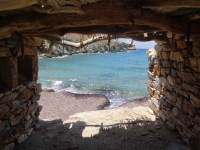 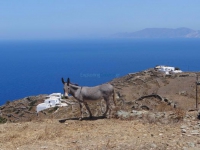 And that history and preference form the backdrop for the Folegandros of today: accommodation and dining enterprises that respect the character of the island, and visitors interested in landscapes uncontaminated by tasteless, excessive human intervention. 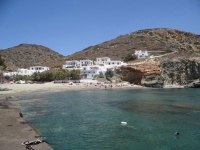 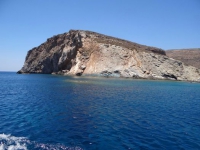 Especially in recent years, the island has gained fans who prefer either the most expensive hotels in Chora, or the rented rooms or more relaxed and affordable camping in Livadi. In August, the streets of Chora can fill with people, and Agali Beach may be covered with towels and umbrellas, but Folegandros still manages to convey the mystery of Kastro, the piety of the church of the Virgin Mary on the hill, the carefree relaxation of the beach, and awe before the cliff that lies beneath Chora. 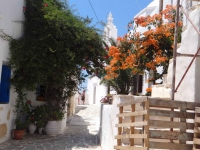 Chora is an endless stage set perched on the edge of a steep cliff high above the sea. This picture is only perceived from a distance, since visitors find Chora friendly and appealing. But vehicles do not, because they are forbidden to enter or park in the little streets of the town. Parking is available off the peripheral road that circles Chora; then the legs take over. And this is the best way to enjoy the offerings of the capital of Folegandros: the traditional narrow houses, the busy squares, the medieval houses of Kastro, the incomparable view from the path that takes you up to the church of the Virgin Mary. Most of the facilities on the island are also concentrated in Chora: hotels and rooms, restaurants and tavernas, cafés and bars. 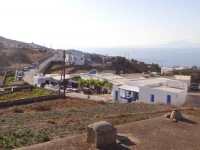 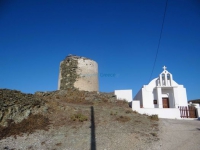 The more traditional rural settlement of Folegandros is located in the northern part of the island, covering a wide area along the main road. Most of the houses here were farmhouses or "themonies," as they are called. The word has roots in ancient Greek and means “bring together,” describing these independent residential units that brought together all the work of farming and animal husbandry. The rectangular stone blocks were in perfect harmony with the environment. Some served as the main houses, and the other buildings shared the remaining tasks (barley storage, wine making, etc.). An interesting, accurate representation of such a “themonia” is presented at the Folk Art Museum of Ano Meria.

Located 6 kilometers from Chora, the village is famous for tavernas that serve delicious traditional food. 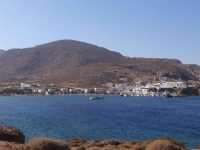 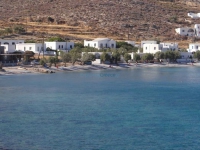 The houses of the village are spread out around the bay, where the port and the beach are located. The settlement of Karavostasis is close to many beaches, including Vardia, Latinaki, and Livadi. You can also take a boat from Karavostasis to the beach of Katergo. 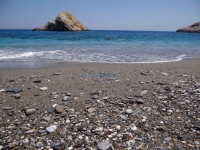 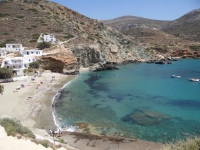 After signing-up the contents of your Trips will be displayed here.
0.4504 18.9MB SSL